Predicting the Impact of Climate Change on Marine Biodiversity and Ecosystems

Global warming and ocean acidification caused by CO2 from human activity are thought to bring about dramatic changes in the marine ecosystem. Their impacts include the effect on marine habitats; for example, marine organisms shift up north, seeking a new habitat with optimal water temperature due to the advancement of global warming. One such example is that excessive increases in temperature in the tropical area such as Okinawa causes coral bleaching and their habitats are extending to temperate areas where they had never been seen before. Ocean acidification obstructs calcification and induces metabolic disorders in living organisms, reducing the population of calcified organisms as well as the size of marine life, and causes situations that may lead to the depletion of marine resources.

Shimoda Marine Research Center runs laboratory tests on the impact of global warming and acidification on marine organisms, mesocosm experiments utilizing large-scale incubators, as well as field experiments using the CO2 seeps on the islands of Izu and Shikine, which are the windows into future ocean after the advancement of acidification. Through these activities, we work on a diverse array of efforts that clarify the response of marine biodiversity and ecosystem for climate change from the following two points.

1) Evaluation of impact on individual species, mainly through lab experiments

We use water tanks with adjusted temperature and pH levels to conduct analysis of climate change impact on groups of organisms such as coral or sea urchins that play a vital role in the ecosystem. We clarify the relationship between optimal water temperature, optimal pH and organism distribution.

2) Evaluation of ecosystem level impact through mesocosm and CO2 seeps

The CO2 seeps discovered on Shikine Island are a globally valuable marine region due to natural acidification. Collaborative efforts across a diverse range of research fields at Shimoda Marine Research Center are conducted for multi-faceted analysis of biodiversity, element circulation, metabolism and physiology of wild life, behavior and more. Through the two points of research above, we show the impact of ocean acidification not only on individual species but also on the ecosystem level, in order to contribute to predicting the impact of climate change on marine resources. 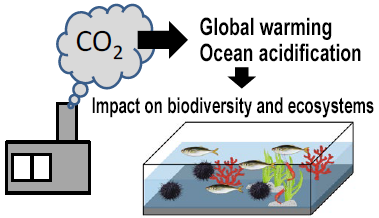 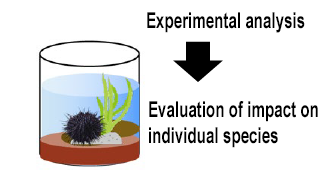 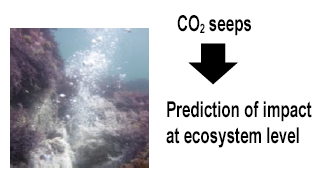